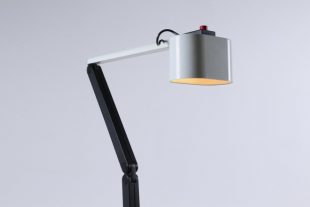 Clearly a precursor to the 1980ies Memphis movement; this very rare 1970ies System design floor light designed by Ettore Sottsass for Erco lighting. Italian architect and designer Ettore Sottsass ( 1917 – 2007) began working as a consultant for Olivetti, designing equipment and furniture in the fifties and sixties and particularly known for the iconic red Valentine typewriter. Sottsass made his name as a designer who, through colour, form and styling, managed to bring office equipment into the realm of popular culture. Later he became a leading member of the Memphis movement, who’s colorful, ironic pieces were hailed as one of the most characteristic examples of Post-modernism in design. Sold to a Dutch collector of Sottsass items.