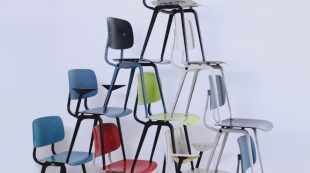 Pioneering early fifties design; the frames are not made of metal tube, as in most similar designs of this period, but folded sheet metal, ending in push-fit rubber feet. Though produced in a large number of pieces from the fifties until the early seventies, these chairs now are hard to find. For most schools and companies it was prohibited to sell or keep furniture which was written off after several years of intensive use, which means most of these chairs have been destroyed already at the time. Revolt chairs were produced in a number of different color combinations which could be choose from at the time.