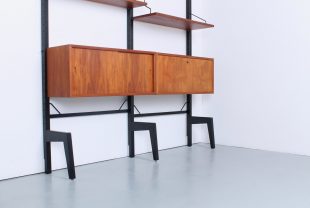 Back in the late 1940ies, Poul Cadovius created one of the first modern style shelving units, and the Royal System became an instant succes up until this day! During the fifties many European furniture companies followed this success and started producing a wide range of comparable wall mounted systems, but only the Cado system offered a large number additional parts that could be choose from at the time. Poul Cadovius worked with a number of famous designers such as Arne Vodder, Grete Jalk and Finn Juhl.