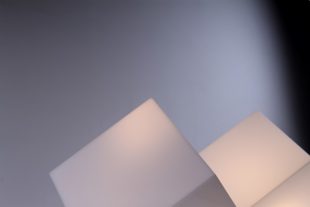 Very impressive and rare objects designed by Dutch designer Paul Driessen in 1974 for Raak lighting.
The gracious mirrored perspex base holds a ‘floating’ opaline perspex cube which evokes a comforting, ’transcendental’ ambience of light.
These lights are partly hand-crafted, and have been produced for just a few years by the progressive Raak lighting company.
Curious thing is, the design was developed during the same year the first cube-houses by Piet Blom were built, which almost have the same structure. Sold to a vintage dealer.